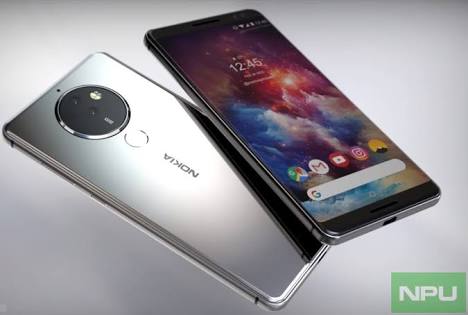 The Android-powered Nokia 8 which was released back in the year 2017, was bearing Qualcomm’s Snapdragon 835, but now there is only little information as to when the company is set to unveil its Snapdragon 845 champion.

According to a recent leak, the Nokia 8 Pro is actually what is going to be unveiled later in the current year and it feature Qualcomm’s most powerful SoC to date. So, let us hope that this very device is able to come up with improvements that critics have later found in Nokia’s previously released crown jewel.

While you are getting the idea of having your hands on the smartphone we are talking about, must bear in mind that we did hear about a Nokia 10 also in the works, but it does look like the Nokia 8 Pro is what is going to be the official name of the product, as per the information that Nokiapoweruser got a hold of.

The device we saw in the leaked image made us to anticipate that the upcoming smartphone will have an advanced camera module.

The camera in the Nokia 8 had been criticized by reviewers because they already had tested such great smartphone cameras only to be struck in the head with a Snapdragon 835-powered smartphone that is not in same league as its competitors.

You can also see that there is a fingerprint scanner that is shown at the back of the phone, meaning that the Nokia 8 Pro would not be accompanied by any of the in-display fingerprint reader.

As the other specifications of the flagship are concerned, the currently unknown to us is that , the phone will have an 18:9 aspect ratio.

HMD Global Oy branded as HMD is a Finnish company that is affiliated with Nokia. The company is operating since December 2016, and develops and markets smartphones as well as feature phones under the “Nokia” brand.

It is the year 2018 after all and the only devices we anticipate to see with 16:9 aspect ratios are those that are featuring very affordable prices. So, the Nokia 8 Pro could still be a great buy if the company and HMD Global are able to keep a lid on its pricing.

What are other features that you think that the Snapdragon 845 powerhouse could come with underneath the hood? Tell us your thoughts below in the comments.

MyDoctor.pk raises $1.1million in funding from International VC Firm and rebrands to oladoc.com