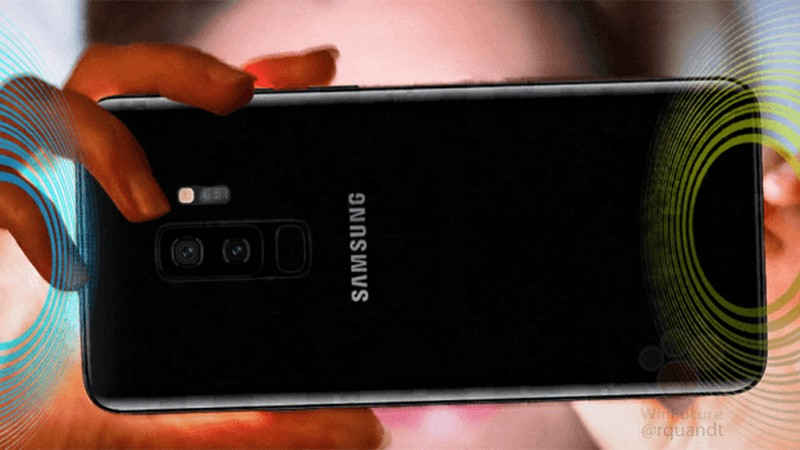 Find the complete specs sheet for the Galaxy S9 & S9+

Winfuture reports that the  Samsung this year has mainly focused on the camera of its flagship device,  which was clear when they handed out media invites with the caption “Camera reimagined”.

Reports say the Galaxy S9 Plus has been given a dual-camera system on the back, aligned vertically improving the position of the fingerprint sensor, sitting below the camera in a position which could be easy to reach while not smudging the camera lens.

12 MP rear sensor on the single camera S9 with variable apertures, allowing a switch between  f/1.5 & f/2.4, to help in capturing good shots under variable lighting conditions is also confirmed.

The smaller aperture will give greater depth of field for landscape shots in good lighting and the other would improve low-light performance.

With S9+, camera will have the S9’s variable aperture system while the other one will have an f/2.4 aperture.

The rear-cameras have a recording capacity of 4K videos alongside optical image stabilisation. Each sensor will use a combo of laser autofocus & dual-pixel autofocus for faster autofocus capabilities. The camera can shoot videos at 960 fps but the resolution is not made clear.

The front of the device have an 8 MP selfie camera with an aperture of  f/1.7 alongside the auto-focus capabilities.

An Iris scanner and face authentication security systems is also featured in the phones. The devices might arrive with iPhone X-like Animoji’s.

Both the devices are rumoured to sport stereo speakers.

S9 will sport a 5.8-inch Super AMOLED QHD infinity display having an aspect ratio at 18.5:9. The S9 Plus will feature the same display, albeit with a screen size of 6.2″. The phone has been designed in such a way that the chin of the device got reduced to give a higher screen-to-body ratio.

There will be 2 variants of the S9 and S9 Plus, and one model will be powered by the Qualcomm Snapdragon 845 SoC while the other would feature Samsung’s Exynos 9810 SoC.

The S9 will have 4 GB of RAM while the S9 Plus will feature 6 GB RAM. Both the devices have 64 GB of internal storage and there’s a possibility that a higher storage variant would also be announced. The phone will have microSD card support (in any case) to boost the storage to 256 GB.

The phones will be shipping with Android Oreo 8.0 out of the box overlaid with Samsung Experience 9.0 UI. The IP68 certified devices can survive a plunge in water for up to 30 minutes at a depth of 1.5 meters.

The devices are to be introduced in three colours: Midnight Black, Coral Blue, and also Lilac Purple.

Pre-orders are starting from 25 February while delivery is set to begin by 8 March.

No word is out yet on release dates & price, but we will be sure to be keep our readers updated as soon as we get information. So, stay tuned to our site for more MWC 2018 coverage.