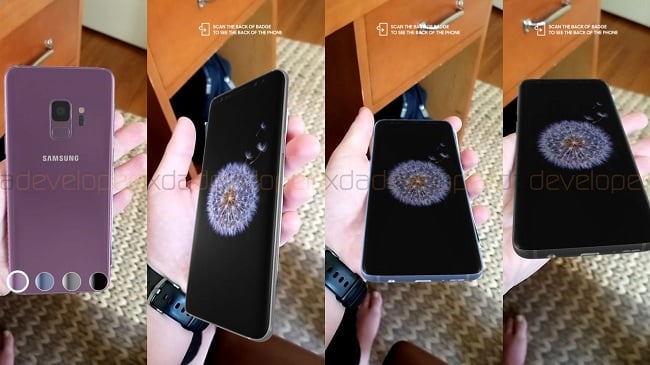 Galaxy S9 launch event attendees to get Augmented Reality S9. It seems that the last couple of days were full of leaks and revelation about the upcoming smartphones which are going to launch either on MWC 2018 or later in this year. So with another day we got another leak which is related to Samsung Galaxy S9 leak.

This time we get to know that there will be a surprise for the people who will attend the Galaxy S9 launch event happening on Sunday, February 25. So, during Mobile World Congress, attendees of the launch event of Galaxy S9 will be able to scan their invite and outlook the new handset in Augmented Reality (AR) by using Samsung’s Unpacked 2018 app.

XDA Developers are behind this leak, who reports that a Reddit user decompiled the app and discovered a bunch of Galaxy S9 3D models.

Must Read: Payments Digitalized by SimSim

According to these 3D images there would be confirm four colors

On the other hand, the leak also showing the Bixby button, the speaker grill, and the fingerprint scanner which is at the new position this time.

XDA Developers also reveal a couple of minor details in the models like a new flash and a redesigned heart rate monitor.

How to and where to get the app to view 3D models of Samsung Galaxy S9?

So if attendees want to view the 3D models at the launch event then they will need to download the Unpacked 2018 app from Google Play and use it to scan a code on their event lanyards. With a bit of luck this will later be opened up to anybody who has the app. So go get the app and enjoy the 3D models of upcoming flagship smartphone from the house of Samsung which is considered as one the king in mobile world.