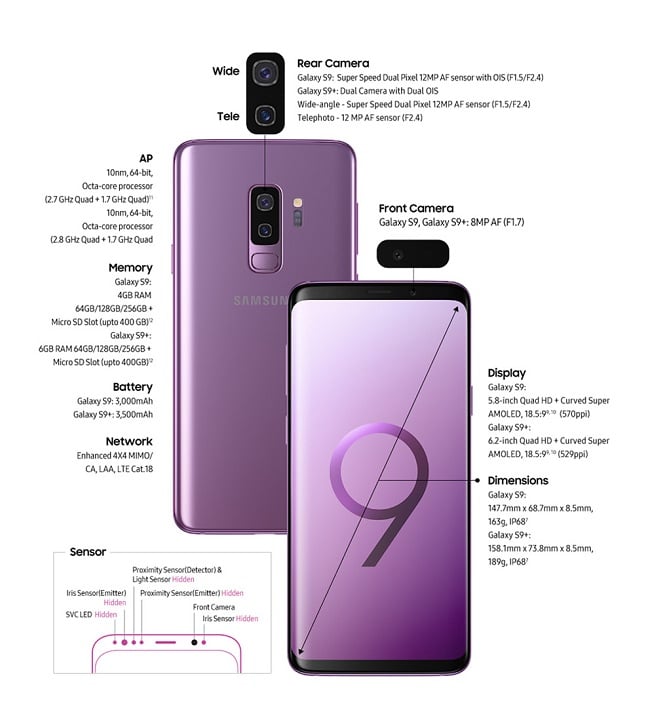 The interest catching features of Samsung Galaxy S9. Finally the most awaited Samsung Galaxy S9 got launched yesterday, and we are in luck to have a phone that though looks a lot like its predecessor, it also packs some amazing and unique features and stands out  from the rest of the flagships crowd.

Though the lower battery capacity of Galaxy S9  is disappointing, we hope that its software optimization will enable the device last longer.

A detailed test of the device is needed to give pros and cons though, by the looks of its specs  we are in believe that these are the best and interest catching  features of Galaxy S9.

The Galaxy S9’s big new and improved camera  featuring first dual and variable aperture for shooting great photos irrespective of the lighting conditions is the most catchy to me. Both Galaxy S9 & S9+ feature mechanical aperture able to go from F1.5 in low light to F2.4 in even brighter conditions.

Alongside reduction of noise in dimmer spots it enables the user tweak and experiment with the different apertures in the Pro mode of smartphone. The mechanical aperture is able to add more depth to the user’s photograph. It can help take pictures without worrying about the light.

Though not new, still it’s exciting to see this feature in the new Galaxy S9 smartphone that enables capture up to 960 frames per second for 0.2 seconds.

On the screen of Galaxy S9, you can adjust the defined motion detecting box to get the place set where you want the device to capture super slow-mo videos. Also you can set up this mode manually if you are not in mood to depend upon Galaxy S9’s software to slow down the perfect moment.

The device enables you to save the slow-mo video as a motion wallpaper. Also you can create a GIF to share it with your friends or on social media.

Galaxyb S9 captures the facial features of the user for creating an emoji that can express emotions. The users can use AR emojis to send any message text or recorded to family or friends or for the sake of some fun while they’re bored.

State of the art processor

For the US consumers, the Galaxy S9 come with the state of the art processor, Exynos 9810 chipset or Qualcomm Snapdragon 845 chipset. Both of the chipsets in S9 provide fast processing speeds alongside the latest Android Oreo.

The design of Galaxy S9 resembles with its predecessor Galaxy S8 though, the company has responded to the much criticism on the fingerprint reader of S8, and now has placed it below the camera of Galaxy S9, so users would not smudge the lens while attempting to unlock their device.