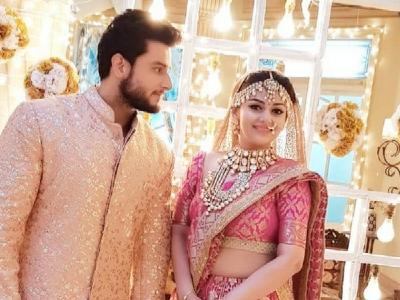 Dipika Kakar having converted to Islam and Shoaib Ibrahim got hitched in a private ceremony in Shoaib’s hometown Bhopal. Dipika, proud to be a Muslim has converted her name to Faiza.

After fighting all the odds together, the couple are happily married now. While talking about their inter-religion marriage and the feeling of being married, and the feelings of being in relationship,  Faiza said,

“I can’t put the feelings in words. I have noticed the change from the day I have got married. I initially though it’s ok Shoaib and I have been in a relationship for so long, but no things have changed. May be the way I look at him, the respect towards him has grown. It’s a priceless feeling,”.

When Dipika was asked about making the decision of converting to Islam & changing her name, she said that truth remains truth and it is true that I have converted to Islam but she didn’t know why and when she done it. She also said i don’t want to talk about this very personal matter.

Dipika thinks that the issue of conversion is not worth sharing with media but she said for the audience and media they are actors and have always shared everything.

The couple have shared all their happy moments with all the audience, so the audience and media should not compel them to share what they actually don’t want.

Faiza is very happy and proud that she has done it for herself and her happiness. Her family was with her in this decision and her intentions were not to hurt anyone.

While they were talking about their inter religion wedding the couple said, they did never bother about belonging to different religions, Shoaib opines that when you are a celebrity you remain always under scanner and there are people present to love you, but also there are people who try to bring you down. Shoaib told that they always take care of their family and parents while they are making decisions and in case the family and parents are ok, they don’t care about the rest of the world.

Shoaib also denied to consider himself a celebrity he said that he is a simple man belonging to a simple family want to lead a simple life.

The couple is welcomed warmly in Islam and we wish them all the best.