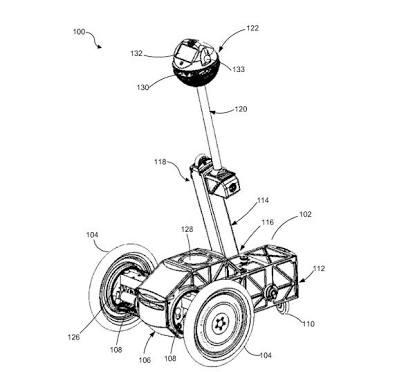 News
Home - News - Would Facebook Robot Photographer be yours?

Facebook has received a new patent from the U.S. Patent and Trademark Office (USPTO) for a robot that balances on two or three legs.

This self-balancing robot designed to follow users around the house to capture our precious “Instagram-able” moments with its built-in camera, screen, and microphone does not take photos only, it can also  facilitate video chats over the platform.

The patent received on Tuesday also notes that the robot can carry cargo and it also comes with a self-cooling system that controls its temperature.

This personal cameraman is credited to Scott C. Wiley, who is a Facebook employee and he had previously worked for a telepresence robotics firm.

Telepresence robots the previous work place of Scott C. Wiley seem to be the inspiration behind Facebook’s new personal photographer, as these robots are essentially videoconferencing screens mounted on moving bases.

Must Read: Bitcoin value may arrive at $100, says Harvard economist

Businessmen use Telepresence robots to remotely attend meetings or galas,  projecting their faces on the screen & for interacting with people as the robot perambulates all around the room.

Facebook’s robotic cameraman are not much different from Telepresence robots in their working system. CNN has noted that there is vast potential for the new product. Assuming absolutely that this Facebook-branded robot makes it beyond a patent and into actual production. It is difficult to tell recently, especially since telepresence robots have not really found any kind of solid market yet.

Would you use a stick to take selfies while Facebook gives you a robot to do the same job? Probably No. Up till now, having a robot that does follow you around could be quite disconcerting. Absolutely, it might be able to capture your best candid moments while you enjoy personal and family time as well. Also keep in mind that it might also not just stop there.

But before imagining the robot taking your pics must consider that having another in-home artificial intelligence devices that can watch everything you do could create problems. It could not more than a plain bothersome. Would not it be bothering you that a robot decides the moments you are celebrating to capture? Would it be a secure way of enjoying your beloved’s company?

Whatever Facebook plans, I would suggest taking selfies on your own, when and where you decide to take, so that your personal data remains private.