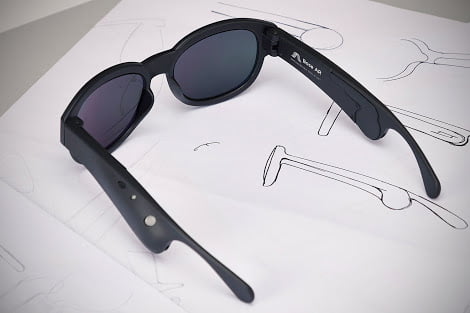 Lifestyle
Home - Lifestyle - What are you looking at? Bose AR sunglasses will let you know

What are you looking at? Bose AR sunglasses will let you know

Bose, a company associated with making headphones, made an announcement at South by South West (SXSW), for the company’s still in nascent stage pair of of AR-enabled sunglasses. The announcement has brought forward a whole new way AR can be implemented.

The concept sunglass by Bose is capable of telling more about what is being looked at by directing sound into the ear canal of the user.

While Bose could have undergo the same strategy with a pair of headphones, it has certainly decided to shake things up a little more to open the platform for all kinds of the wearables.

A blog post by Bose does explain the capabilites of the concept wearable we are talking about. And the company states that the sunglass makes use of the Bose AR platform which does use head movements, and voice commands alongside taping on the wearable to execute various functions.

Must Read: Telenor Pakistan continues to lead the way in mobile agriculture with launch of Connected Agriculture Platform Punjab (CAPP)

Bose, while talking about the platform itself, stated,  “Bose AR is a platform, which means others can develop both apps for music, travel and education, among others — as well as wearables, including headphones, glasses and helmets.”

In order to expand the capabilities of audio AR wearables, the company is aiming at the partnership with other companies and working with developers.

The company is also set to encourage the startup community so they can begin work on the new platform. Bose has also gone ahead & set aside $50 million to invest in companies that develop apps, creates services and related technologies for the “Bose AR platform”.

Well, we are not sure for the concept sunglasses whether Bose intends on launching it for the masses just yet.

However, the company does assure us that we will hear about more wearables that arr based on Bose AR platform in the near future.

Samsung Galaxy S9 and S9 Plus available in Pakistan