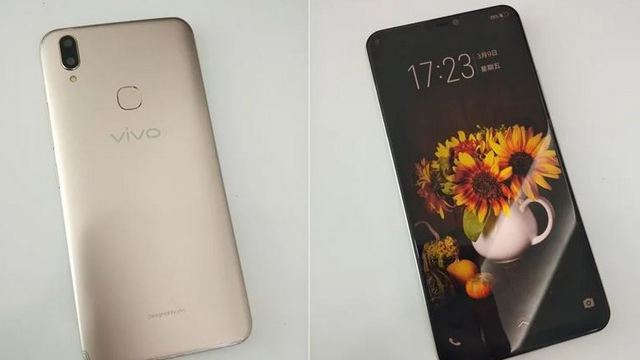 Vivo V9 Expectations: launch in Pakistan 28 March. The successor of the Vivo V7 launched back in 2017 us expected to carry forward the trend set by Apple. Yes you thought it right, the upcoming Vivo V9 will most probably sport a notch at the top of the display.

The phone is getting its place in the rumormongers’ and leakers community and is being said to be unveiled at the “smartphones launch day” scheduled for 27 March, in line with the Huawei P20 series, and Xioami Mi Mix 2. And the images of Vivo V9 are also getting leaked before the launch day, just as the case is with other mobiles.

According to the leaks of Vivo V9 it is confirmed that the phone will be the very first phone from Vivo with an 18:9 aspect ratio display having a notch.

The upcoming Vivo V9 is expected to come with a vertically aligned dual camera set up on its rear side.

A fingerprint sensor in the top centre portion of the rear side alongside absence of scope for it on the front due to the thin bezels, is also being reported.

The Vivo V9 is expected to sport a 24 MP front-facing camera just like its predecessors Vivo V7 and V7 Plus.

The phone we are getting indulged in discussion about is also expected to come with a micro-USB port.

The interest seeking aspect of the phone is that the company has retained the 3.5 mm audio jack with this phone.

The phone is also being expected to run Android Oreo out of the box, not only that FunTouch user interface atop it is also anticipated.

The company will launch Vivo V9 in India on 27 March, and in Pakistan the launch ceremony is expected to happen the next day on 28th of March.

Study: How does University education impacts the lives of students with lower socioeconomic backgrounds?