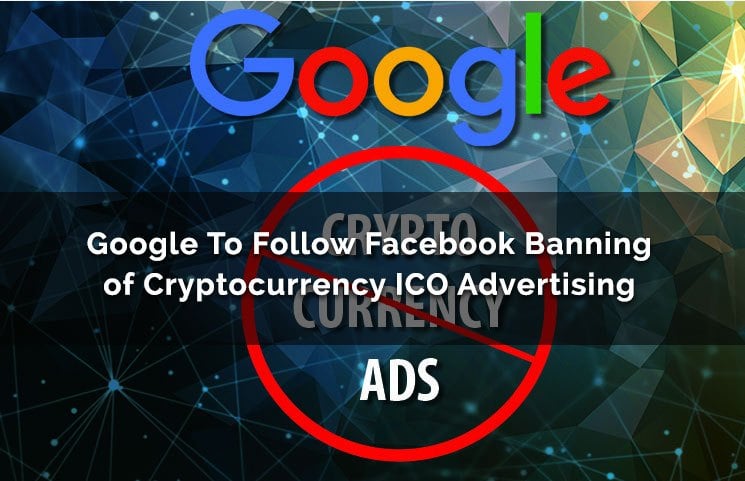 After Facebook and Twitter now Google to ban all Cryptocurrency and ICO ads. With the passage of time, I’m wondering what will be the future of Cryptocurrency. As, back in January Facebook took an action in which company banned all advertisements of cryptocurrencies and ICOs from all crypto exchanges. Then, we heard that Twitter started crackdown against crypto scammers.

And at the moment, another tech giant, which is extensively famous for its variety of internet products and services, Google is planning to ban online advertisements promoting cryptocurrencies and initial coin offerings (ICOs) from June.

Recently, an announcement came by Alphabet Inc. owned Google LLC that it is going to block ads for “cryptocurrencies and related content” in its updated policy.

This decision means that even companies with legal cryptocurrency offerings won’t be capable to publish their advertisements via Google’s ad platform, which puts ads on its own sites as well as third-party websites.

Google’s updated policy for crypto and ICO ads has been announced by the company along with its “trust and safety” ads report which is comprised of a review of malicious and deceptive ads of online scammers from its search engine, third-party websites and its video network.

Must Read: Huawei phones are not compatible with android auto with no fix in sight

On the other hand, the updated policy of Google for crypto and ICO ads will efficiently be implemented from June 2018.

Scott Spencer, Google’s director of sustainable ads believes that the company is careful about a possible harm that these ads can carry out, as he stated,

“We don’t have a crystal ball to know where the future is going to go with cryptocurrencies, but we’ve seen enough consumer harm or potential for consumer harm that it’s an area that we want to approach with extreme caution.”

Furthermore, the search giant Google is also commanding a ban on ads for financial products as well as binary options, an uncertain contract with an all-or-nothing in return. As the ads are not banned curently, so Google queries for terms like “binary options” and “buy bitcoin” provide four ads at the peak of the search results.

It is pertinent to mention here that Google makes about 84% of its total profits from advertising and the company earned record-breaking $27.27 billion revenue in ads’ business in 2017.

However, we believe that putting a ban on crypto and ICO might not influence Google’s massive sum of revenue in upcoming times.