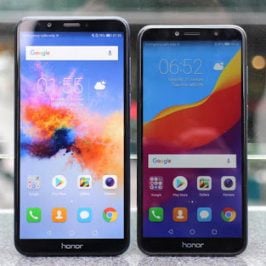 Mobile
Home - Mobile - The Honor 7C and Honor 7A, unlock just in a second

The Honor 7C and Honor 7A, unlock just in a second

The Honor 7C and Honor 7A, unlock just in a second. Welcome the Honor 7A and the Honor 7C, the best cheap smartphones that share a lot of features such as 8:9 screen aspect ratio (popular with massively priced smartphones), alongside 8MP selfie shooter.

Both the phones allow you shot in low light with their smart soft LED light. Fingerprint scanner, 3,000mAh battery, Android 8 Oreo operating system and 3.5mm headphone jack are the features available on both the phones.

Both phones set for the sale before the end of April, differ in prices  as Honor 7A will cost £139.99, and Honor 7C will cost £169.99 due to its slightly larger screen, more power, greater storage & dual rear cameras.

Both the phones will be available in black and blue.

The duo is cheapest one for offering face unlocking system. Face ID of these phones is faster than that on the iPhone X. However the feature will not be available from day one, it will arrive via an over-the-air update sometime in May.

The Honor 7C is an affordable dual rear camera smartphone that looks smart, with thin metal rear plate that sits on a plastic frame running round the circumference of the device.

It comes with 5.99-inch display, and is bright and colorful, although the 720p resolution means things are not as pin sharp – which is noticeable during video playback and gaming when you look closely.

Snapdragon 450 chipset, 3GB of RAM and 32GB of storage, able to be built upon via the microSD card space in the SIM tray are also specs Honor 7C comes with.

While, the Honor 7A is an all plastic device that reinforces its entry-level credentials, and is lightweight and easy to hold in one hand with a touch screen of 5.7″ and  1440 x 720 resolution.

Honor 7A has a single 13MP rear camera which can take acceptable photos but not too much. It comes with a lesser chipset in Snapdragon 430 paired with 2GB RAM and an offer of 16GB of storage.