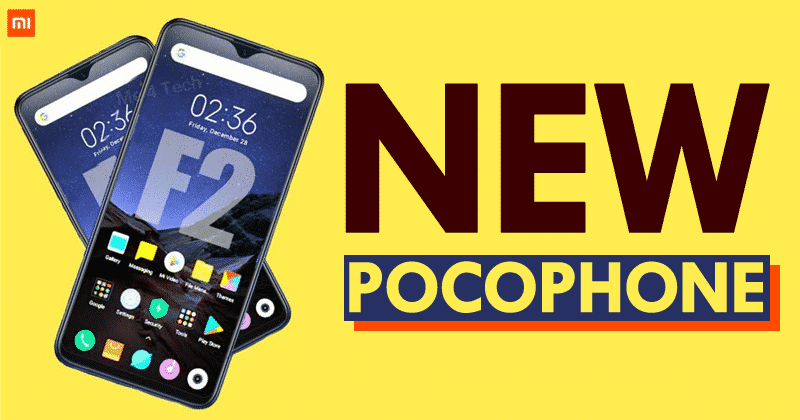 Well Xiaomi has been hitting the new quite often nowadays, and have in turn launched some amazing and up to date devices this year such as the Mi Max 3, their flagship model the Mi Mix 3 and their most recent addition the Xiaomi Play, and well the party isn’t over just yet. Now the Chinese Cellphone producer is all set and ready to launch another Pocophonetomorrow, which will probably be a successor to the current Pocophone F1 which was launched only a few weeks back.

Now if you have not be tailing the news, well then you should know that the PocophoneF1 is a flagship-grade smartphone which managed to become the favorite of the Xiaomi users this year, which was due to the fact that the phone offered a really high performance components at a very, very economical price. The Pocophone is one of the cheapest flagship options available in the cellular market and it is pretty much like the OnePlus when it was first launched, which easily countered the smartphones which were double the price of that of the Pocophone which is why folks at Xiaomi have decided to excite their users once more this year by making the announcement of launching another Pocophone tomorrow. The Xiaomi India’s General Manager Mr. C.Manmohanposted a tweet in which he told the users that they are preparing another Pocophone launch in the country.

But here’s the catch, no one is one hundred percent sure whether the company will launch the new Pocophone tomorrow and moreover whether it is a Pocophone F2 or perhaps a another option of the Pocophone F1 variant. We are trying are best to not be to optimistic regarding the said phone but lets be honest considering the success that their first Pocophone had, we cannot wait to see another one, even after its only been 4 months since the first one launched and hit the markets.

Now according to some leaks and rumors, the company islaunching a kevlar Black variant version which will support a 6GB Ram and a composite 128GB internal memory.  Currently the Kevlar version of the Pocophone F1 is only available on the 8/256GB model variant and that variant is also named the PocoPhone F1 Armored Edition, and it seems that a seemingly tantilizing version of the Kevlar Black color will now be available for the 6/128GB model aswell.