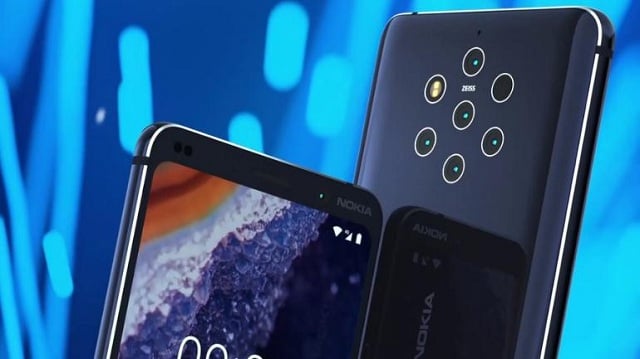 A new video which has surfaced on the Internet, reveals that the new Nokia PureView will come with Five cameras.

Now leaks and rumors surrounding the Nokia 9 PureView have been coming and going for some time now, and the potential phone to have five cameras is a relatively famous rumor now. The phone is expected to come with a Five camera rear setup. A brand new video, now suggests that this new device could be officially unveiled to the world very soon. Evan Blass, posted a photo of the said phone on Twitter earlier today and now the mysmartprice has also published what seems to be a promotional video of the Nokia 9 PureView, which by the way is still an unofficial phone, as of right now that is, but that can soon change.

Must Read: Google sets an aim, to fix the laggy Interface on the Chrom Os Tablets!

Now in terms of the device,  the new device looks a lot like the Nokia 8 Siroco, with the exception of the rear back. The new video shows off a wild penta-lens setup at the back with five simultaneous shots and claims that new phone will come with an new and improved efficiency in the low-light situations, which has been a problem in their new devices. The cameras will be able to re-focus images after they have been taken. HMD also seems to including a 5.99 inch ‘PureDisplay’ in the device which can support an HDR10 and with it an in-display fingerprint scanner. Moreover, mysmartpiecereports that the new device will be powered by a Qualcomm Snapdragon 855 processor which will support an 6GB Ram and a composite 128GB of storage.

Now the PureView brand was acquired from MicroSoft by HMD earlier in the previous year 2018 and they partnered with Ziess last year to reunite the partnership of the Nokia and the Ziess brands for the Android devices. Now, while the handset will be a PureView branded device, it is quite unlikely that we will see the same image sampling technologies from the Nokia 808 or Lumia 1020, the devices which were launched when these two last partnered up to produce a product. It is still not quite clear when HMD Global will be looking to launch this new device but reports have suggested that this could be done as soon as January 2019 which by the way has already begun so let us see!