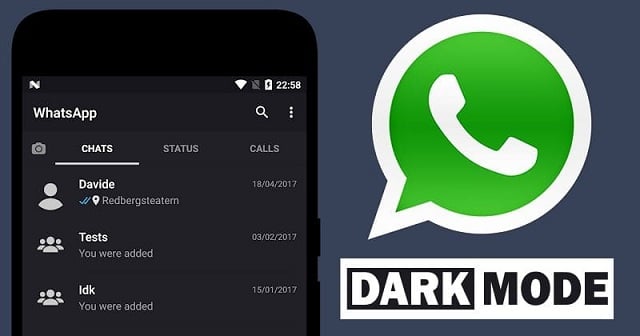 Amongst other apps, WhatsApp is without doubt the most used app around the globe. The users seem loyal to the cause of WhatsApp, and this is supported by the fact that the Facebook owned company lays down a constant stream of updates within – in an attempt to make the app ever more easier to use, and in order to stay up to date with the vast demands that consumers seem to have. The previous update surrounding WhatsApp was a group update, and it had brought about some quite decent features that many were looking forward to. Now, the new reports go on to suggest that WhatsApp is now brining the all new dark mode.

The latest reports have gone on to suggest that WhatsApp might as well bring the ‘dark mode’ feature as part of its upcoming updates. If these reports do indeed turn out to be true, then this will bring about an alteration in the simple and uncluttered UI that WhatsApp has seemingly been hanging onto ever since its inception – back in 2009. Right now, the only customization that is available to users is that they can change the background wallpaper, so this does actually go on to represent only minimal means of customization.

Must Read: Samsung Galaxy M20 to feature with an Infinity V-notch?

Facebook, the parent company of WhatsApp too had announced just a little while ago that it too is working on its own dark mode for its mobile app. More recently, the social networking site has commenced the testing of the Facebook Messenger’s Dark mode, and hence, it feels like the rollout for this seems imminent.

Bring about the dark theme would indeed be a good move by Facebook, since many other social media platforms have gone on to launch their own respective dark theme modes.