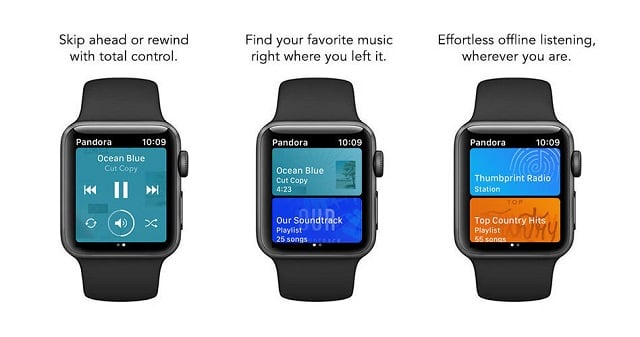 So the Pandora iOS update has been released by the company and its latest version of the app has included a brand new feature which has been made from the ground up which will without a doubt enhance your Apple Watch experience. You will now be able to control the playback or give a thumbs up to whatever song you are currently listening on the Pandora but what is even better is that you now also possess the feature of Offline Playback, so you can more or less, leave your phone at home and listen to a playlist while you are carrying out a jogging run.

Furthermore, only the Pandora’s paying customers will be eligible to get this feature and for the non-paying customers this feature is currently off-limits. You will in that case, need to have a subscription to either the Pandora Plus or the Pandora Premium which is the company’s full on Spotify Apple Music competition, to listen to music on the Apple Watch. Moreover, the Spotify’s Apple Watch application does not yet offer offline listening capabilities and in addition to that the Pandora takes advantage of the whole display on the latest Apple Watch Series 4 while the Spotify’s own application is optimized for the prior models and will not let you stream music with the Apple watch’s cellular data connection.

Moving on, when you first open the app it will show you a text which will state that Pandora will automatically sync the music when it will be in close proximity to your iPhone and after a few minutes, the mythumbprint Radio Playlist made its way over but has not as yet cleared up how we will choose the music which we want stored on the Apple Watch.