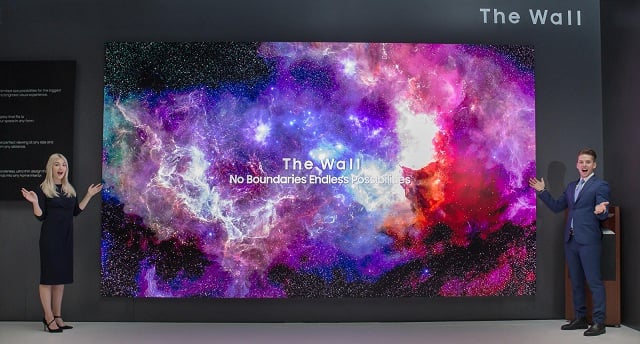 Featured
Home - Featured - Samsung to launch a massive 219 inch TV screen, which they call “The Wall”

So the South-Korean Technology giants Samsung has unveiled one of the worlds largest commercially available TV screens for the users around the globe. The company calls this range “The Wall” series. Moreover, at the one of the largest technology events that take place annually, the Consumer Electronics Show 2019, Samsung announced its massive TV screen which is an amazing 219 inches and will make it the largest TV screen for home use.

Furthermore, the second publicly announced released version of ‘The Wall’ is a 219 inch Micro LED Screen which will not come in one piece but instead will have to be made through combining various pieces until the final outcome, The 219 inch TV screen is achieved. The users will be able to customize their insanely large screen according to their liking and will have to use modular units that can be joined together.

If you do not know what Micro LED is, well it is the latest TV Technology which builds up millions of tiny self-emissive LEDs and have been dubbed the Micro LEDs. Millions of in-organic red, green and blue microscopic sized LEDs are needed to form one extremely large picture. Samsung has termed this innovation the “Next Screen Revolution” and ‘The Wall’ will be one of the first screens to feature this specification.

The technology is being accredited with truer Black tones and brightness which will be very high which is surprising. The modular pieces, which join together to form the final picture does not seem to be visible if one is standing at a distance of 6 feet from the screen. It should be noted that earlier in the last year, Samsung announced such a TV, which was a wee bit smaller in size but that version of ‘The Wall’ has visible gaps between the modules. Now apart from the company’s ‘ The Wall’ ,  Samsung is also set to get on to developing their version of the 8K technology TVs which will also be the next generation of TV screens

As of right now, Samsung is still in the development stages of the series and have hence quoted no price for the TV screen but seeing as how large the screen is and the fact that it will pack the newest technology in the TV screen industry, users can expect the price to be very high