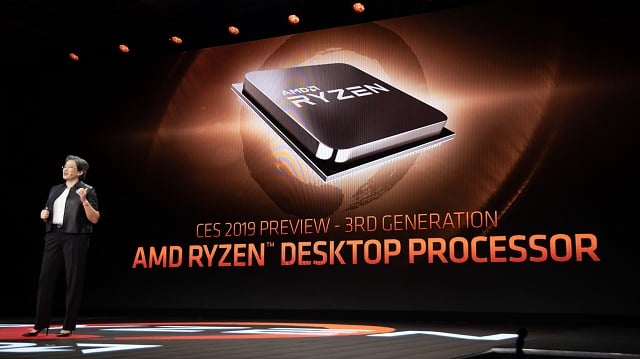 Intel and AMD were the only competition in terms of the pc processors at the CES 2019 both companies announced their10-nanometer (nm) and 7nm processors and both the companies also introduced hybrid processors that can easily be regarded as the next big innovation of the future.

On one side, we have the Intel’s LakeFieldprocessors, with architecture that is more like an ARM CPU than a traditional computer chip. Instead of only containing one of the 10nm CPU cores, the LakeField processor will feature one central 10nm Sunny Cove core which will be  paired with four Treemont Atom cores, giving the processor as a whole, great efficiency. Later at the CES 2019, we also AMD release their Hybrid processor which is the Ryzen 3rd Generation chip which pairs up with an eight-core 7nm chiplet coming along with a second 14nm chipset which will by function manage the memory controllers and PCIe lanes.

Both processors aim to do different things with their hybrid architectures, but both of the futuristic processors share one thing in common: they’re both moving away from the traditional monolithic processor, which has influence over the market for some time now, alas, something different is on its way.Moreover, after all the talk, we’re sure that all of the users might be wondering what the difference is between a traditional monolithic and the new, hybrid processor designs. Moving on, for most of the part, processors that come installed In laptops and PC’s  have stuck to a monolithic design, in which there is one homogeneous processor which is  built from a single architecture. For example, the Intel Coffee Lake processors used a single 14nm die while thevRyzen CPUs featured a 14nm die, Ryzen 2nd Generation a 12nm die, and we move on.

Must Read: Both Samsung Galaxy S10 5G variant and foldable Galaxy to arrive with huge batteries

Now the, ARM-based CPUs which are built into phones, tablets and even the Qualcomm-powered Windows 10 machines mostly opt for this type of design in order tomaximize the  battery life and even the performance of the device and now we know that it seems we’re starting to see the beginnings of hybridization in computer processors but at least in Intel’s case with possibly the LakeField, which will change things somewhat, if not fully.Now by packing in both performance cores and low energy cores into the same chip,  hybrid processors could allow your devices to handle all your tasks on demand and save battery life when they’re just on standby. Furthermore, the chips with this type of architecture can act as compact systems on a chipset if they also have integrated graphics, memory and othersuch hardware modules.

Intel, believe it or not has already shown a demonstration of their capability, basically showing the people how small its hybrid processor-powered device can truly be. At the CES 2019 mega event, the company introduced its LakeField processor which were built into the smallest motherboard the company has ever produced, which measures at about the length of five American quarters, a form factor that can easily be compatiblewith tablets and even possibly, with some phones and according to folks atIntel, the LakeField processors can power anything from very low power devices to full PC performance.AMD didn’t have nearly as many proof of the concept that Intel showed but users got the idea and they can thank Intel for that, However they did show that its new hybridized processor doesn’t lose a step in performance due to the new design. The company’s mystery Ryzen 3rd Generation processor scored 2,023 points in Cinebench. By comparison, the Intel Core i9-9900K and AMD Ryzen 7 2700Xscored 1,873 and 1,798 points, respectively in our own testing.

Now we know that it mightseem like the hybrid processors have a promising future in computing technology, However, we don’t want to indulgethe users into too muchhype, until we actually get some devices with the processors inside.It should also be noted that not all devices may benefit from a hybrid architecture. For example, PCs built for production and gaming will be better off with classically constructed CPUs and the maximum power a monolithic processor can deliver. Though, the regularity at which Apple’s iPads, equipped with its self-made processors, completely leave the Windows 10 laptops behind in the race for better device efficiency, but Intel and AMD now have the chance to change just that.