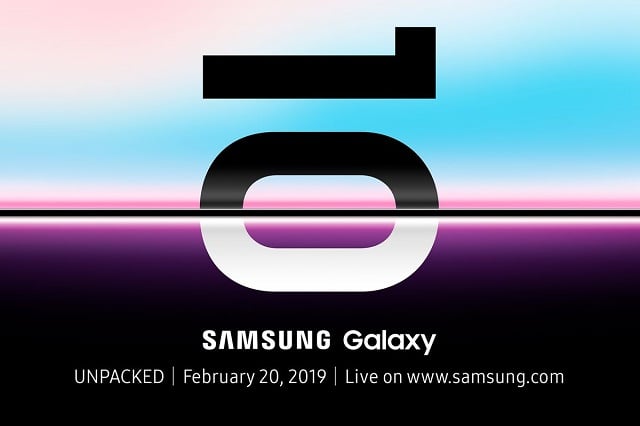 So people, the wait is finally over as Samsung have finally confirmed the date for the launch of their Samsung Galaxy S10 series. The reports stating that the phone may not have the launch event in Barcelona but in fact at the Mobile World Congress 2019 were quite accurate. Samsung has now confirmed that it will be going forward with its Unpacking ceremony of the new phone sets on the February 20th 2019 in San Francisco, California. The teaser that has been sent out leaves the people with no doubt that the phone will be the star of the show.

Moreover, it should be noted that Samsung have used the Mobile World Congress stage, which sets up in Barcelona annually, to launch their Galaxy S series for the last few years now but they look to restart the record by launching it in San Francisco. Samsung will be holding a special Galaxy S10 Unpacking ceremony just for the S10 and since the event is only one week prior to the MWC 2019 it will allow the phone to dominate the market for at least one week until rival companies launch their new phones at the event in Barcelona.

Must Read: Hybrid Processors revealed in CES 2019, the next big thing possibly?

The upcoming Flagship phones will mark the 10thanniversary of the Galaxy S series devices and we can understand if Samsung would like to give this series some special treatment. A total of three models consist in the S10 series, the S10 itself, The S10 Lite and Finally the S10 Plus and a separate S10+ 5G variant will also be launched with it containing a massive 5000mAh battery.

The new device will contain new and innovative features such as, the infinity-O display, the first in-display fingerprint scanner and the first phone to debut with a 5G capability. Camera setups will vary across the S10 Lite having two cameras at the back, The S10 will pack three cameras at the back and finally the Plus model will be coming with 4 cameras at the back. Users will also find a Exynos 9820 chipset in the phones hardware coming along with 6GBs of Ram. Samsung will be using the Snapdragon 855 SoC’s for the selected markets in the USA.

There are still no words on the price of the phone but we can expect the high end phones to come with a hefty price tag. Only one month left and people cannot wait for the phone to be launched, well at least we now have a date, February 20th, mark your calendars users.