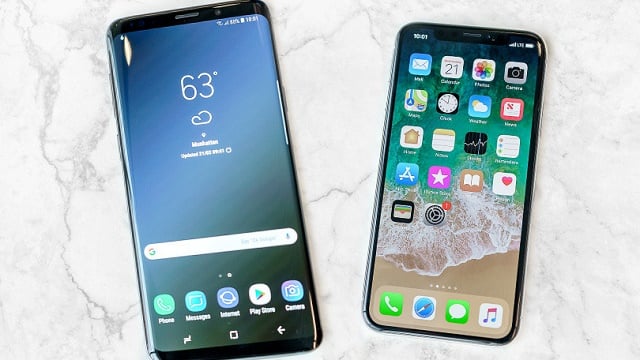 JP Morgan, who is the American multinational investment bank and financial services company has gone on to predict that the smartphone industry will go on to experience a huge strain in the year 2019, and this strain will go on to heavily affect the higher end premium smartphones the most. No need for any introductions – as we know what companies go on to dominate the sales of the higher end premium smartphones – and these include both Apple, and Samsung. So, needless to say, it is predicted by JP Morgan that both Apple and Samsung will take the biggest hit of the market analysis indeed pans out as predicted.

In a note, JP Morgan wrote : “We expect iPhone units to decline by double digits year over year in 2019, due to prolonged replacement cycles and lackluster demand in China.” It is also expected that shipments for the last quarter of 2018 from China are estimated to be lower than that of the same period last year by around 20 percent. And while many expect that only Apple and Samsung might be in for a tough year, it is actually expected that the whole of the smartphone industry will be facing difficulties this year, as there is a predicted reduction of that between 4.8 and 5.5% in the shipments this year. This goes on to reveal a higher loss that was recorded in last year – as 2018 incurred a 2.9 to 3.3% YoY loss. While we expect 2019 to be a tough year, many anticipate that the next year, 2020 will actually be a rebound year for the smartphone industry, as the 5G phones would indeed be in full action next year, and this would quite likely prompt the users to upgrade to the faster speeds. However, even with the rebound year in mind, many expect that the increase in the growth rate won’t actually be as much as one would’ve hoped if they belonged to the smartphone industry – as many forecast a growth rate of 0.9% instead of the 1.9%.

It is expected that Samsung’s own shipment will drop in the low single digits in the year 2019. However, unlike Apple, Samsung does indeed have a bit of flexibility attached with its business plans when it comes to smartphones, as the Korean manufacturer will be competing in both the high-end, as well as the low and mid-range phone categories. However, while the flexibility does provide Samsung as an alternate route to maintain the image of a juggernaut in the smartphone market, the company will indeed have to sacrifice profits margins in the process. And of course, with the rise of Chinese phone makers, including the likes of OPPO, Vivo, and Xiaomi going on to offer smartphones with great qualities and very little prices than the iPhone or Samsung models, you probably would’ve been anticipating the downfall of both the smartphone giants one time or the other.

Nokia X5 gets the pie update in China