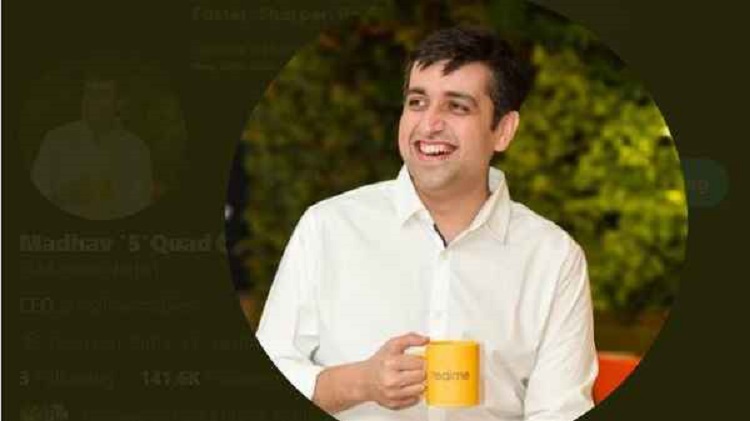 Featured
Home - Featured - The CEO of Realme tweets from an iPhone

In the past, we have seen Android phone brand ambassadors making sponsored posts on social media with the aid of an iPhone – and this has caused some mixed reaction. Just a couple of years ago, actress Gal Gadotpromoted the Huawei Mate 10 Pro with a tweet which followed from an iPhone. The CEO of Realme tweets from an iPhone.

Not only this, but great shock came in the particular occasions where official accounts of Android phone brands were tweeted with an iPhone. As memory serves, the Samsung Galaxy Note 9 was promoted by Samsung Mobile Nigeria – with this being done with an iPhone. Also, the Razer Phone 2’s announcement came courtesy of an iPhone.

Now though, these past examples have been topped with the recent turn of events, as a tweet from Realme Mobiles’ CEO in Madhav Shethy was made from an iPhone.

Just recently, the executive belonging to Realme tweeted about the updates which are set to follow for both the Realme 3 as well as the Realme 3i. The tweet which was made from an iPhone – has since then been subject to deletion. Unfortunate news for the executive comes with the fact that not so long introduced a feature which allows users to see a deleted tweet which they have interacted with prior to deletion was introduced for Twitter, and due to this, a screenshot of the tweet has been made available on the web.

Must Read: The Realme 5s to feature with the Snapdragon 665 processor

The blame in such cases where official accounts for Razer and Samsung promoted devices from iPhones can be placed on the manufacturers as they did not seemingly provide their users with work phones – or indeed failed to enforce the user on the work phones for such interactions on social media.

As far as the case for Realme’s CEO goes – it isn’t really clear whether the tweet was posted by him or perhaps an assistant who was tasked with managing his account. Regardless however, this hasn’t at all enhanced the image of the company as a whole. Comments have since then been placed on Twitter which go on to state that the CEO doesn’t even trust his own brand if he uses a competitor’s device. Others though haven’t been as ruthless.

The Realme 5s to feature with the Snapdragon 665 processor