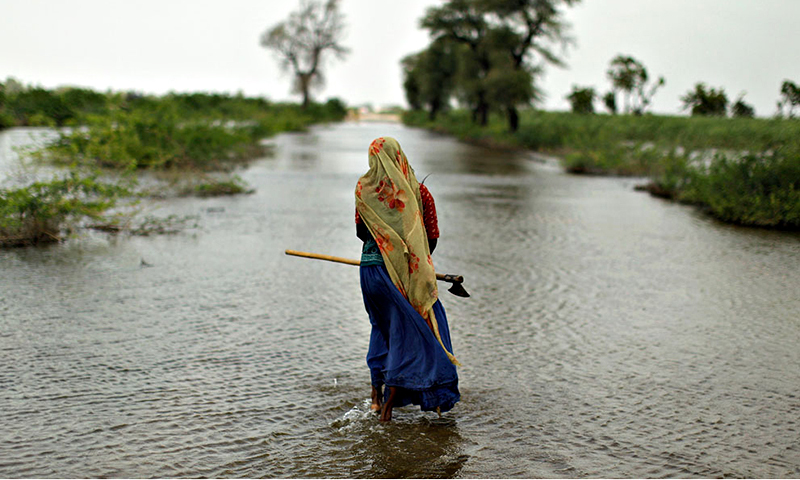 Pakistan has jumped two places on a global climate report, but for all the wrong reasons. The latest report of Global Climate Change Index places Pakistan on the 5th spot. These are the countries affected most from climate change from 1999 to 2018, in its annual report for 2020. The latest report is alarming.

The other countries include (1) Puerto Rico, (2) Myanmar, (3), Haiti, (4) Philippines, (6) Vietnam, (7) Bangladesh, (8) Thailand, (9) Nepal and (10) Dominica. The important thing here is that Pakistan is among countries who produce the least amount of carbon emissions. But global green house effects are hitting Pakistani glaciers and environment hard. Pakistan already has vulnerable green infrastructure, which will be unequipped to handle the future calamities.

The CRI report, which is developed by Germanwatch, suggest that Pakistan is among countries that are “recurrently affected by catastrophes [and] continuously rank among the most affected countries both in the long-term index and in the index for the respective year”.

Agricultural Problems due to climate

Androulla Kaminara, ambassador designate, delegation of The European Union (EU) to Pakistan said while addressing a university event in Sindh “Pakistan is facing challenges in growth in agriculture due to Climate Change. Situation has deteriorated compared to last year”

Must Read : is solar eclipse visible in pakistan

The effects of climate change

The report measured the climate-related events that had happened in 2018 and they have comparatively increased. “Germany, Japan and India were suffering from extended periods of heat. Recent science has found a clear link between climate change and the frequency and severity of extreme heat. In Europe, for example, extreme heat spells are now up to 100 times more likely to occur than a century ago.”

One notable thing that report has indicated is “out of the ten most affected countries and territories (1998–2017), eight were developing countries in the low income or lower-middle income country group.”

The report clearly shows that world is not taking appropriate measures in this regard and certainly not ready for the imminent global calamity that will hit the world hard in next few decades. Pakistan has one of the most vulnerable climate change profile. The developed countries – who are responsible for the most amount of carbon emissions – bear most of the responsibility in this regard. Unfortunately, they are not addressing this issue the way it needs to be.

Perhaps a little later than required, but the Government of Pakistan is taking several initiatives like clean energy and “billion tree plantation” projects. However, they are insufficient, and the progress is too slow. Already weak economies like Pakistan are clearly not ready for what the future holds. Pakistan lacks proper water storage capacity. The underground water is now at the dead level and the heat levels are rising on top of it. India, our neighboring country, saw one of the worst heat waves in 2019 followed by the Karachi heat wave which took lives of around 2000 people in 2015.

As individuals, the least we can do is reduce our carbon footprint by reducing gas emissions from cars, recycling more, reducing consumption of meat and using eco-friendly products.

The climate emergency is the need of the hour. Pakistan has to take aggressive measures by taking matters into its own hands. World powers will not come to rescue us, not with current attitude and such arrogance towards global climate change issue.

Kashmir’s people lose yet another connection to the world