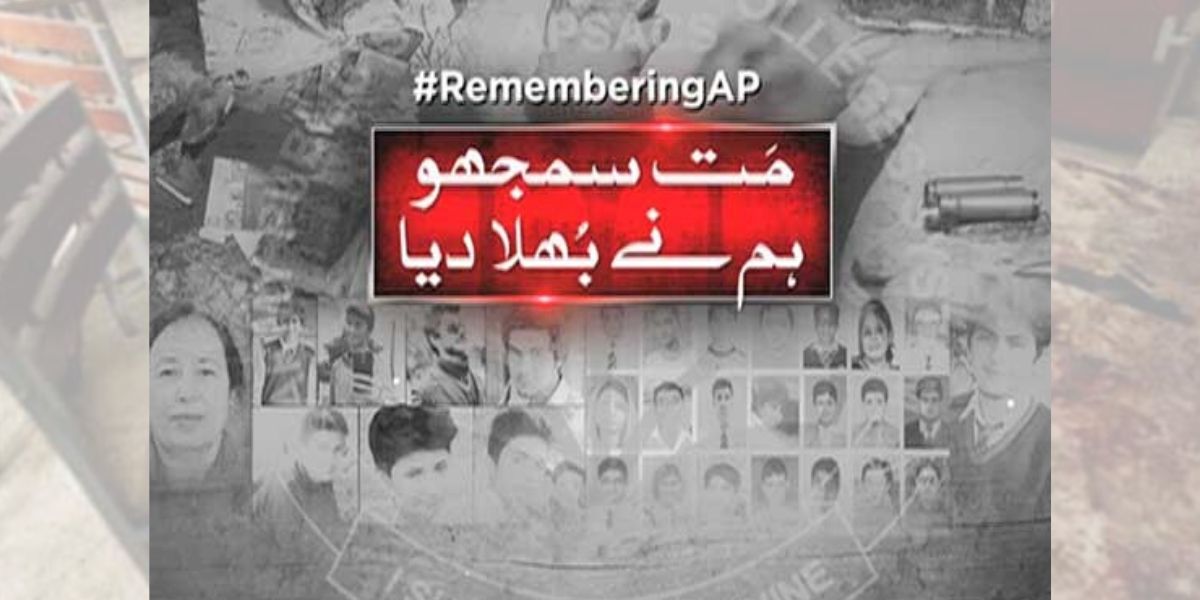 Today marks the saddest event in the history of Pakistan. Not only Pakistan, all over the world people mourn on 16 December and marks as a black day. On December 16 people and victims of Peshawar APS attack remember their children and loved ones who were taken away from them with the most dreadful terrorist attack in the history of Pakistan. APS were covered with blood today exactly five years ago, and that day the stains of that blood remains, and would haunt the whole country.

Politicians and notables across the country are sending condemnations and remembrance messages and tributes while remembering the martyrs. The horrendous incident took the lives of 149 children and staff including principle. The attack was the deadliest to date in the world as it took the lives of 134 children.

Speaker National Assembly Asad Qaiser on 5th Remembrance of APS attack extended a message in which he said “those young heroes, the children of army public school, engraved a message with their blood on our conscience to stand for a terror free and educated Pakistan”.

He stated that the whole nation is proud and will always remember the resilience of the parents and victims of  the attack.

President Arif Alvi in his message found it hard to “commemorate” the day. He said that it is hard to remember without tears in eyes.

“The nation cannot forget the massacre of little angels/teachers of APS 5 years ago on this day” said president, “In its remembrance, we reiterate our pledge to root out terrorism and extremism in all its manifestations from our country,” he further added.

The Chief of Army Staff in his message said that the bravery and “carnage” of the people will never be “forgotten”.

“Five of the involved terrorists have been hanged through military courts. Salute to martyrs and their families. We have come a long way in failing terrorism as a nation. United we move towards lasting peace and prosperity of Pakistan”, DG ISPR delivered the message of COAS on twitter.

The day is still fresh on the conscious of the nation. It marked the defiance of the people of Pakistan as a nation, moreover, country’s resolve to fight against the evil which turned their streets, destroyed their homes and tormented their lives for two decades. Now, that country is still healing, but the wounds still hurt. Pakistan has come a long way in these five years and uprooted the plague of terrorism in the country. Happiness and smiles has returned and a new day and bright future awaits, now that the country has come out from its darkest times.