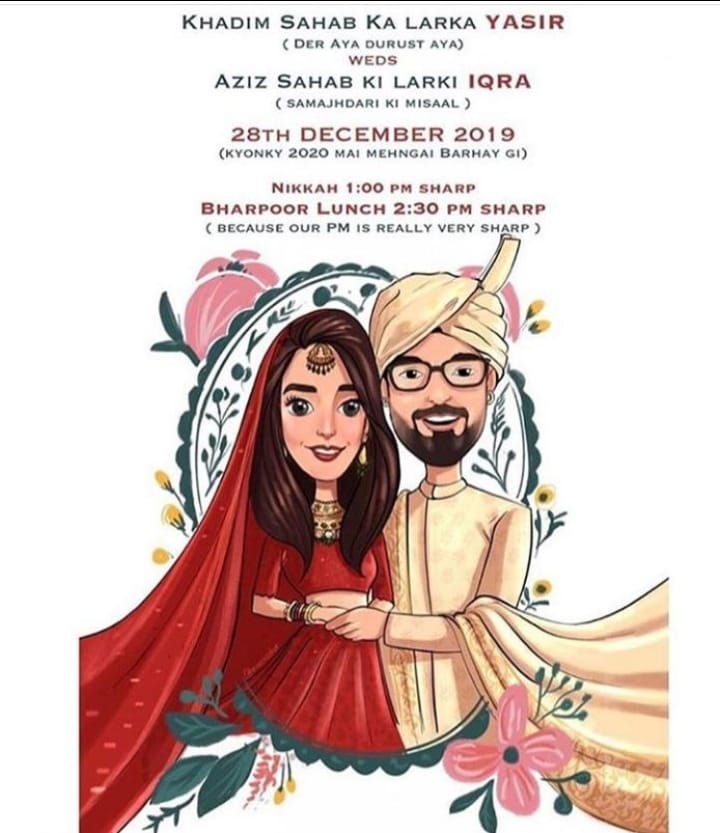 Finally the moment has come, for which everyone is waiting for. Iqra Aziz and Yasir Hussain are getting married. And people do want to get every bite of it. The wedding date has been announced in the Instagram handle of Iqra Aziz. They are set to marry on December 28th. This was posted by Iqra with the wedding card captioned “Duaoun me yaad rakhein”.

Everyone was keeping a close eye on Iqra and Yasir’s rather day to day unfolding chemistry. The couple was continuously in limelight ever since Hussain proposed to “Aziz ki beti” in an award show. The rumor was that they are getting married in ‘small’ and a ‘close’ ceremony. Only the people close to the couple are invited. The much sought after marriage is supposed to be a rather private event but all know how it will unfold.

The couple made headlines when Yasir Hussain proposed Iqra Aziz. The emotional proposal to Iqra quickly went viral on social media. Yasir went down on one knee to lock her finger with an engagement ring. Since then, people can’t seem to get enough of the whole saga.

People were obsessed with the couple after the engagement. Iqra Aziz rose to fame from the drama ‘Ranjha Ranjha Kardi’. The actor frequently make appreciating posts with Yasir on Instagram to show her affection. That way hype were doubled for the fans.

Recently Iqra wished Yasir his birthday and came on Instagram with a picture coupling with Yasir Hussain. the caption said “Happy Birthday to my one and only SuperHero and super amazing Human♥️I love you and may you have all you deserve and wish for???”.