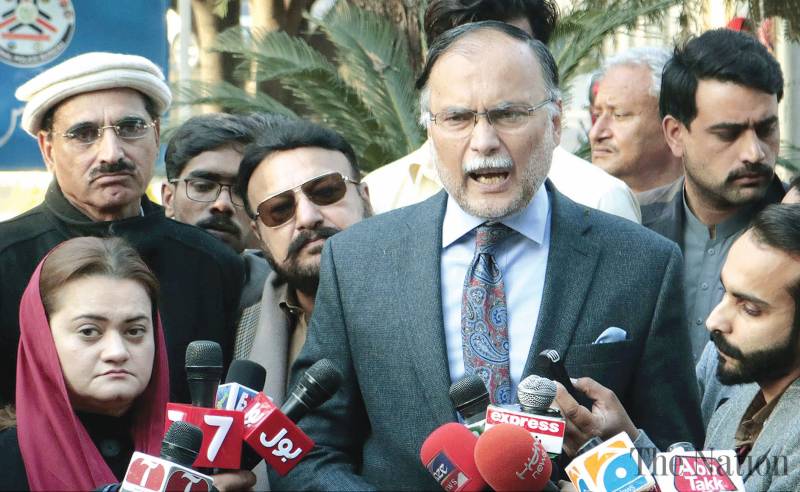 PML-N leader and former Minister Ahsan Iqbal has been arrested by the National Accountability Bureau (NAB) Rawalpindi. NAB summoned Ahsan Iqbal on the backdrop of Narowal Sports City Complex case. He appeared before NAB investigation team, however, he wasn’t allowed to leave, while he was arrested during questioning. Ahsan Iqbal will be presented before accountability court on Tuesday after a complete medical checkup. His arrest warrants were signed by the NAB chairman.

PML-N leader Ahsan Iqbal was arrested on a corruption case pertaining to Narowal sports city complex. The case against him was built on the basis of corruption in the funds of the project. He was accused of using the funds of Pakistan Sports Board.

NAB has been investigating the case since July 2018. Interestingly, The complex was built with an astonishing cost of 2.9 billion. 2.5 billion out of total 2.9 billion had been spent on the project. The matter that hit the radar of NAB was the mode of funding, as the funds were allocated to Pakistan Sports Board (PSB). The PSB later spent the funds on the project. However, sports ministry had been dissolved after the 18th amendment. Moreover, it was a provincial matter completely, yet the funds were allotted through PSDP under Ministry of Planning. Former Minister appeared before NAB on multiple occasions, but failed to satisfy the investigation team.

Must Read : Pm Khan Warns India Over Any Movement Regarding The ‘false flag Operation’

Surprisingly, one other thing that raised many eyebrows was the location and purpose of the project of such extent. It has been built near Indian border town of Narowal. The complaints were filed in this regard, as Narowal is a small border town and there was no need to initiate such a project there.

While talking to the media before appearing in NAB the former Minister said, “His ministry, had approved several projects worth Rs 2,300 billion. “I challenge everyone to provide me evidence of corruption in a project.”

Almost all the PML-N leadership is facing corruption cases with their leaders convicted by the court. NAB will now demand the physical remand of the Ahsan Iqbal on Tuesday.