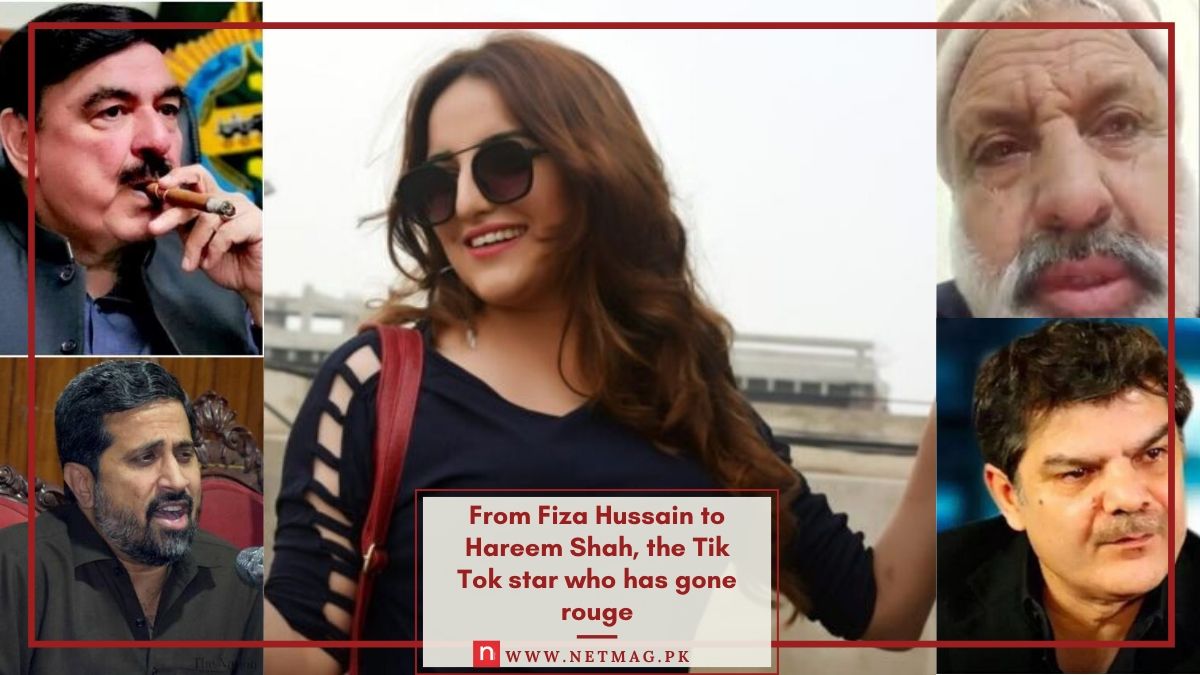 From Fiza Hussain to Hareem Shah, the Tik Tok star who has gone rouge

The one who knows how to get caught in controversy, is right now Hareem Shah. Recently a video has been released by the father of the Tik Tok star Hareem Shah, apologizing for the acts of her daughter. The weeping and teary eyed, father seemed shattered by the leaked videos of her daughter. He was ashamed, while expressing his distress over videos of Hareem Shah with prominent political figures are hurting the whole nation.

Zarrar Hussain Shah, an aged individual, who released a twelve minute clip in which he bursts out in tears for her daughter, revealed that he is the father of Fiza Hussain, – the real name of Hareem Shah – as he expressed his deplore over the acts of her daughter.

Zarrat Hussain further said that he tried to do his best as a father, also he enlightened her daughter with best religious education, meanwhile she graduated with distinction as a religious scholar. He was devastated, also did not seem to know what went wrong. He added that his daughter severely disappointed him.

The Tik Tok figure, who took social media by storm when her videos were released in October last year, where she was seen kicking the doors of the meeting rooms, sitting on the Foreign secretary’s chair and making fun in the Foreign office building and sensitive offices of the facility. However, even the notable government officials are not allowed in the Foreign office building without prior security clearance. The videos irked the whole nation, people came out on social media bashing the Star for disrespecting public offices. Also, it tainted the government’s reputation as a whole, exposing serious security concerns.

Later, in December last month, once again she became the most talked figure, when clips of her friend Sundal Khattak while video chatting with Sheikh Rasheed Ahmed, Minister for Railways in Federal government, had gone viral. The transcript quickly caught the attention of Twiterattis and media. Fayaz ul Hassan Chohan the Information Minister of Punjab also devolved into controversy with his alleged involvement with Hareem Shah and her friend Sundal Khattak.

Following her knack of getting in limelight with powerful political figures, she got harassed and manhandled by the crowd in a public event in Dubai. Later, she was doxed – her personal credentials i.e. CNIC and passport details were leaked – online, consequently, making her the subject of a new wave of harassment.

On her TV interview to a known TV personality, she said, “Sheikh Rasheed is my Behnue (brother-in-law),” adding that, “I never force anybody to come to me and make video and all those who talked to me on cell phone I never gave them my cell number,”

Amid death threats and severe harassment, she now decided to settle in Canada. The social media sensation, who is now in Baku, Azerbaijan is set to fly to Canada. Her friend, Sundal Shamim, known by the name of Sundal Khattak on social media is accompanying her.

However, to some extent, people who are harassing and bashing the viral Star need a detour to their conscious. More importantly, a considerable lot, who are coming out guns blazing, need to look upon the fact, that there are officials within government ranks who had their heads in the clouds, were the ones who paved their own towards shame and ignominy. Now, some are thinking that there’s another Qandeel Baloch in making, but the fact remains that Qandeel Baloch was just a poor girl with poor resources, ultimately got assassinated by society who choose to look sideways from the wrongs that penetrate deep within. Hareem Shah is just the face of the broken government thread, which now become a visible blot on the whole system.

Who is General Qasem Suleimani? a legend or a rebel

Vivo Upgrades The Style Statement with S1 Pro in Pakistan