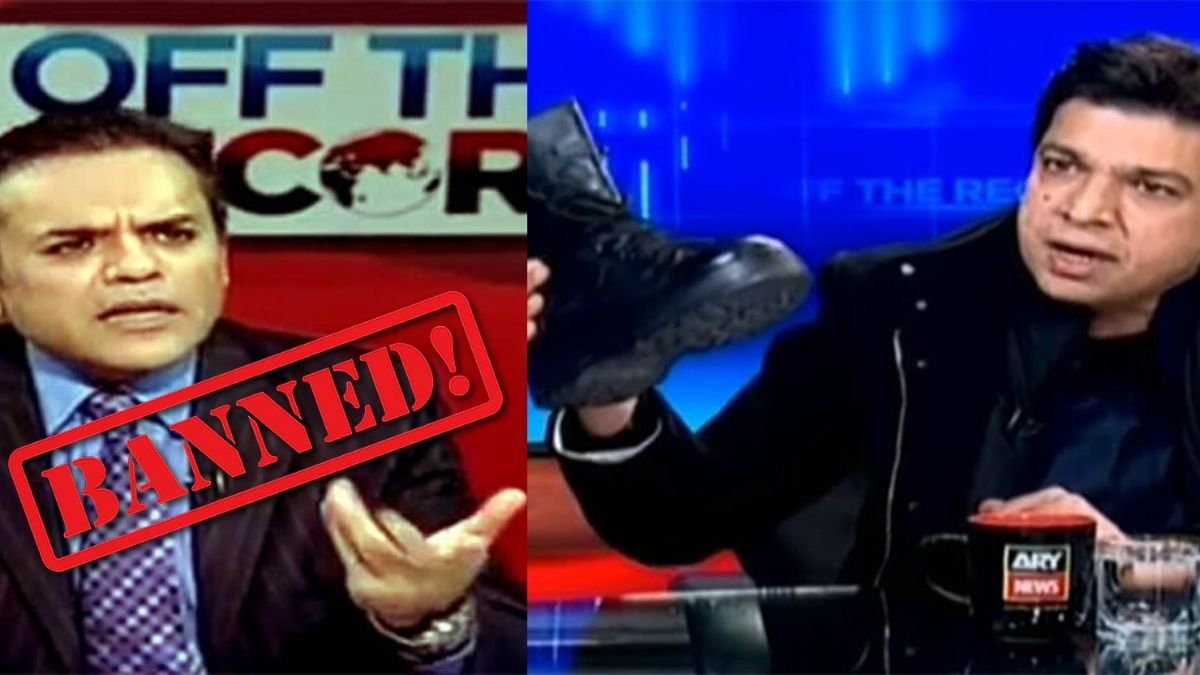 A ‘boot’ banned Kashif Abbasi for 60 days, Vawda gets a pass

The boot issue took a new turn, after PTI minister Faisal Vawda’s blunt move lands Kashif Abbasi, the anchorperson of the program ‘off the record’ of ARY news, in trouble. A notification has been issued by Pemra, banning the program for two months, after Federal Minister for Water Resources Faisal Vawda appeared with a boot on Kashif Abbasi’s show. The minister displayed the army boot on table for everyone to see.

Furthermore, Kashif Abbasi has also been proscribed by Pemra to appear on any television program for 60 days. According to January 15 notification, If the anchorperson appear on any show as a host, guest, analyst or expert, the channel’s license may get revoked by the regulatory authority in further action.

Qamar Zaman Kaira, who was also a guest in the show representing his party along with PML-N’s Muhammad Javed Abbasi, the PPP leader went furious after Vawda’s act, he also criticized Kashif Abbasi for allowing such kind of ‘stunt’ in his show.

Faisal Vawda vowed to “bring it [the boot] on every programme”. He said, “The PML-N gave respect to the boot by lying down,” Vawda, while criticizing PML-N and PPP on supporting the Army Act Amendment Bill on Kashif Abbasi’s show, brought the boot form under the table and displayed in front of the table.

Must Read : Ishaq Dar’s house is up for auction, bid set at Rs185m

Pemra notification, while mentioning Faisal Vawda, termed Vawda’s remarks  “extremely frivolous and derogatory but also an attempt to debase a state institution”. However, the regulatory authority did not take any action against the Minister.

Pemra also said that the move was ‘unethical’, while Kashif Abbasi took the matter “causally” and went on with his usual business, “smiling/cherishing” during the programme.

On the contrary, People on twitter are not happy with the ban, journalists, and media persons are coming up with the tweets to criticize Pemra on taking one sided action.

The rising questions on the steadfast and brisk decision of Pemra, indicate discrimination against one person, while a government minister gets off scot-free. To some people, Pemra’s role is dubious, also the authority’s ‘chaotic’ response to the matter give rise to the suspicions of handling the situation in a hurry and coercive manner, – as the authority seems to be under the pump from somewhere – but primarily, one question remains. Is military ‘unhappy’?

On the other hand, PTI leaders who are criticizing the opposition on their backing to the bill, introduced the bill after demeaning loss and humiliation they had to face from Supreme court, which ultimately forced them to bend Infront of opposition. More importantly, the government got the backing for their bills when opposition is under heavy scrutiny from government and almost all their leaders are facing NAB in different cases.

The leadership, who raised themselves above from the conventional mode of politics of PML-N and PPP is now following their footsteps, even going one step further to not waste any opportunity to humiliate, lambasting and mocking, passing disparaging remarks, ironically on the matter which is government’s own ‘mess’ to clean.

The government also took the opportunity to cash the maximum out of army act bill, following which, they got their other 5 out of 9 pending bills approved by Assembly with the support of opposition.

Vawda’s response was completely erratic and irrational, which would further put barriers on the legislation process, consequently affecting common people. However, Kashif Abbasi was an easy pray who get caught ‘cherishing’ on the bitter side of the reality.

Half of Safe City cameras in Lahore went offline