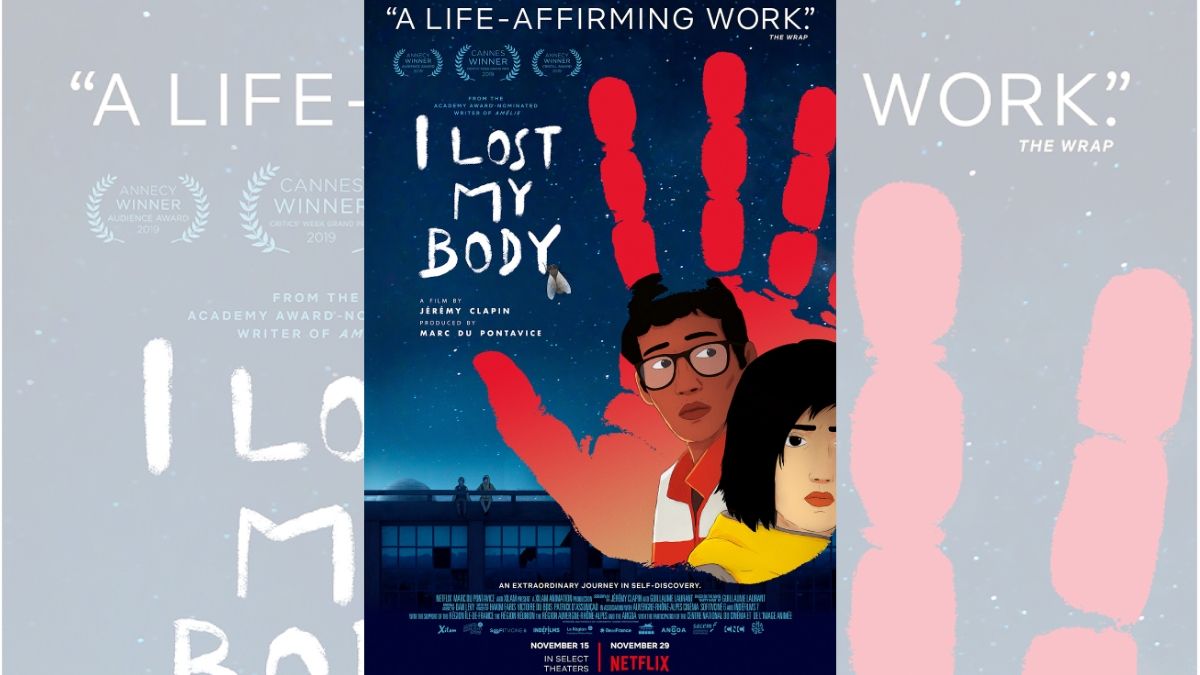 One of the few pleasant surprises of the Oscar nominations — was the nod for Jérémy Clapin’s I Lost My Body in Best Animated Feature. There always seems to be a spot or two in that category for a left-field choice, though in this case, I Lost My Body — a French production which premiered at Cannes and was picked up by Netflix — did come in carrying a number of prestigious critics’ awards, so it wasn’t a complete shock.

All of its awards are well-deserved: It’s a gloriously hand-animated existential fable that manages to be both genuinely sweet and thoroughly twisted. Clocking in at a brisk 81 minutes, the film follows a sentient severed hand making its way across Paris back to its owner — dodging trains, teetering on rooftops, fighting off rats, and nearly drowning in icy rivers along the way (who knew a hand could nearly drown?). But these various urban obstacles are nothing compared to the traumatic memories that flood the screen, as we learn about the life of young Naoufel (voiced in this English-language version by Dev Patel), an orphan who lost his parents at a young age and has been forced to live with his neglectful uncle and loutish cousin. Noaufel’s story — that’s his hand, of course — is told in fragments, and it’s only close to the end that we get the full picture of what happened to him, and why his memories keep intruding on his life.

In the meantime, the film also flashes back to the more recent past, and to Naoufel’s attempts to track down and woo Gabrielle (Alia Shawkat), a girl he first encounters over an intercom when he abortively attempts to deliver a pizza to her apartment. It’s a classic meet-cute — at least, it feels like a classic meet-cute — but we already know that something has gone terribly wrong because, well, we’ve just been following our hero’s severed hand scurry like a crab across Paris in the movie’s present day. It’s like the ghosts of Krzysztof Kieślowski and Charles Addams were asked to come up with a modern fairy tale about alienation and trauma.

What keeps I Lost My Body from becoming too silly or grotesque is Clapin’s attention to physical detail: As the hand silently calculates what it would take to be able to get from one rooftop to another, or the precise arrangement of furniture it would need to go across a room to a window, we get pulled into the physical (albeit absurd) reality of this world, and we become deeply invested in this severed hand’s survival. While I Lost My Body might be a hand-drawn animated film for grown-ups, it has that Pixar-style ability to imbue the most unlikely objects with great personality, even charm, solely through the way their movements are rendered on screen — bouncy and scrappy one minute, fearful and mournful the next.

The story behind I Lost My Body is fairly thin, and while the flashbacks do eventually coalesce into a fuller picture, they never entirely add up to a full narrative. But this seems at least partly by design. Nouafel’s quest to woo Gabrielle starts off feeling a little dated — he does the kinds of vaguely stalkery things that lovesick men used to do in romantic movies — but the film actually manages to turn the tables on him, which is not only refreshing, but sends the story in a more unresolved and powerful direction. Because ultimately this is not a romance, nor an adventure, nor even a surreal thriller, though it has elements of all of those genres. It’s an allegory for the way that trauma prevents us from seeing all that’s possible and moving on. The hand’s quest for wholeness turns out to be, perhaps ironically, a journey to shed the toxic stranglehold of the past.